The so-called "language of the fan" is, I have said and repeated, largely an invention of the nineteenth century, unfortunately linked to a deterioration of the women status in good society. Anyway, in the seventeenth and eighteenth centuries, the fan had a lot to say both by the way it was used and (more) by the illustrations it was wearing. But do we ever speak of the "song of the fan"?

We know that this object inspired many poems, of which we find some examples throughout the pages of this site. We must also know that, especially at the end of the eighteenth century, it was often embellished with refrains from vaudevilles, either to accompany the pictures of those shows, or because their tune, often taken from the famous "clé du Caveau", was used with new lyrics, especially during the revolutionary period.

But we often forget that the fan was also the subjec of songs! Let's confess it, these songs are not immortal, and their easy verses almost always convey the stereotypes associating the fragile fan with the supposed futility of the woman. This does not prevent these bluettes to have a certain charm, close enough (is not it?) to  the contemporary fans of the late nineteenth century or of the early twentieth century.

Lyric  and scores of these songs may occasionnaly be found. Alas most of us lack the musical and vocal skills which would be necessary for a proper interpretation. Learning that one of these songs had been "recreated" in the 21st century, I was able to acquire the sound file and obtain from the interpreter the graceful authorization to share it with the visitors of the Place de l'Eventail. So thank you to Pierre Valray, whose sweet voice will accompany you for reading an old score. You can find on his site (http://www.pierrevalray.fr/index.html) all the "lost songs" he has recreated.

Please  use this small sound reader for listening to Pierre Valray, and while hearing, find below the song lyrics. 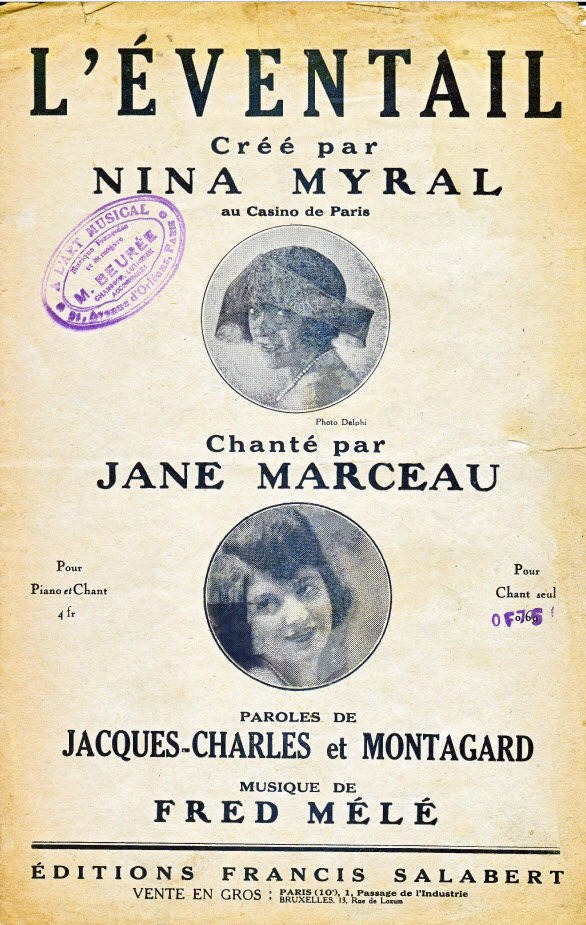 Translation : Of all the objects which the woman adores in their least details, the most charming, I proclaim it, was always the fan. Does not it seem to have a soul? Fitted with feathers or satin, he could repeat, this mutinous witness, a thousand libertine remarks.

Because women are always the same, and on us their power is incredible. With a supreme disdain, they respond to who loves them: "No, no!" when everything inside their heart says "yes". The fan is the sweetest emblem of their exquisite frivolity. As long as the beautiful ones are rebellious, the man will be mad about their beauty.

When you see a coquette handling a fan with a laugh, it is because, fine and discreet, she wants to keep a lover. When the latter, losing his head, risks and becomes too bawdy, the fan is used to bang on the fingers of this clumsy gallant.

But when finally weary of the fight, the woman is caught in her game, her heart also tumbles: it is the time of tender confessions. Then the gallant argument ends with a charming kiss. The fan, accomplice, opens abruptly to hide the two lovers.

The score can easily be found, in the above edition or in others, on the occasion of covers by various singers.

The author of the music, Fred Mélé (1884-1961), conductor -in particular of the Moulin Rouge in Paris-, helped to popularize the jazz in France since the beginning of the 1920s. He accompanied the singer Mistinguett in her revues shows and for her recordings.

To compose these unforgettable words, two authors wher necessary: Charles Jacques-Mardochée, director since 1910 of the Olympia (Paris) was the author of many successful songs (including, with Lucien Boyer, the famous "Cà, c'est Paris! "). He was also director and producer of magazines and music hall shows for radio and television. His co-author, André Montagard (1888-1963), who was also a composer, will remain in the margins of History for having composed the words of the Petainist hymn "Maréchal, nous voilà !".  (Marshall Pétain, at the head of the French Government from 1940 to 1944, collaborated with the German occupier).  May I say I prefer l'Eventail ?

As for Nina Myral, first interpreter of the song, it is the pseudonym of Eugénie, Hortense Gruel (1884-1975). She was a dancer, a singer and an actress, with a rich filmography from 1916 to 1963 (the in L'Homme de Rio by Philippe de Broca with Jean Paul Belmondo).  Jane Marceau (Jeanne Gay, 1896-1981, also an actress and singer), quoted above as a singer of L'Eventail, was also in 1925 the first interpreter of another song titled "Derrière l'éventail" (behind the Fan) by Marafioti and Romani, that Pierre Valray, again, allows us to hear also.


I hope that with this frivolous and futile page, I have given you some fun. As usual, do not hesitate to email me any for anyadvice or criticism!