We give here a translation with of course a lot of mistakes : we gratefully thank our visitors who will take some time for helping us !

The works quoted in our bibliography give about fan history many opinions, often identical and however frequently erroneous, or at least dubious. We will thus be satisfied here to give some lines and marks bench, taken in particular in "Fans" of Maryse Volet and Annette Beentjes (Editions Slatkine, Geneva, 1987) and in the text of Michel Maignan in "L'Eventail ŕ tous vents" (Le Louvre des Antiquaires, Paris 1989).

We have not testimony of the existence of the fan at the prehistoric time. However the relationship of this ustensil with the drive out-flies, and its use in its rustic alternatives, to maintain fire make it possible to think that our far ancestors were not unaware of it. See on this subject the gallery, for a " modern " example.

Very old fans are attested in Egypt more than 5000 years ago ! Des éventails trčs anciens sont attestés en Egypte il y a plus de 5000 ans ! They are ceremonial fixed fans with long handles, actuated by servants. Others, in ostrich feathers, old of more than 4000 years, were found in Sudan. The tomb of Tout-Ank-Amon contained two of those fixed fans, with handles richly decorated with gold and stones, from which the feathers have alas disappeared. Go and see them on the (french) website of the "Amis de l'Égypte Ancienne", a Pyrenees association, an interesting page : the Tout-Ank-Amon Fans. Thanks to them for this contribution !

A wonderful craftman and fan artist, Willie Evans, has also recently recreated Egyptian marquetry and feathers fans. Have a look at some pictures !

In Assyria, some "cylinders" describe palm fans, used in particular at the time of religious ceremonies.

Many sculptures or graphic works in most large museums, show some fixed fan, and number of ancient authors evoke them, in particular in theatre opera. We will give here the description of Anthony Rich (translated back (!) from the Dictionnaire des Antiquités..., translation M. Chéruel, 1883) :

Far-Eastern antiquity was certainly not less fans rich. However, although certain texts (not contemporary) mention their presence 3000 years ago, the fans (initially fixed ones) are not attested in China before 600 B.C. and in Japan before the 3rd century of our era. Some woven bamboo fans dating from 2nd century. B.C. were found in China.

End of Empire and Middle Age

Ladies continue certainly, in Rome and Constantinople as well as in Byzance after, to use the fans described above. The fan kept in the Christian Church the liturgical role that the Jewish religion gave already to the Seraphes. The " flabelli " used seem to have been either with feathers fixed on a handle, or of the type " rosette " or " screen sun ", kind of fan which one will find until XXčme century, in uses generally more profane. Still should it be noted that it is only with Vatican II Council, some only 4 decades ago, that the flabellum will disappear from the pontifical attributes. One of these fans, known as " flabellum of Monza " (VIth century) was in fact the re-use of an object having belonged to a lady of dubious reputation... which by this gift would have purchased the forgiving of her faults!

The RenaissanceThe maritime circumplanet trips, and the world partition between Spain and Portugal, will lead the Iberian sovereigns to receive from Colombus and Cortes feather fans (among them Moctezuma's one, today in Vienna), and the Lusitanian navigators to discover in Japan the folded fan.They will bring back cases, which from Lisbon will be spread in the peninsula and in Italy, where begun the "Renascimiento", causing kings of France jealousy. From Italy, Catherine de Médicis, queen of France, is said to have introduced in France the first folded fan. In England, Queen Elizabeth will apparently be fond of fans of any kind, to such extent that she decided that it was there the only gift her subjects were permitted to offer her! It is at this time that its name is fixed in french : the Middle Ages had known the "esmouchoirs", then the "esventours" (in a charter of 1384), and Rabelais still described "esventoirs of feathers, paper, fabric ". From this period, very few fans have been spared.

The XVIIth Century As opposed to what one could have imagined, the first fans importing countries were not the first to develop a true creation. activity. In spite of what uninformed people often think now, Spain (and especially Portugal) hardly devoted themselves to it. However Italy (in parallel to the screen fans, which remained appreciated) developed a quality production, thanks to the prowesses of the skin dressers in obtaining a particularly fine vellum , known as "cabretille", swan skin etc. Italian and French used these skins rather quickly (and, more rarely, paper), reproducing historical or mythological scenes, on the basis of known painters works.Famous engravers also illustrated themselves in fan leaves creation, in particular Abraham Bosse or Jacques Callot in France, and Wenceslas Hollar in several countries. These leaves are often intended for fixed screens, which will be used also during the following centuries, generally with wooden turned. handles.

Naval Battle showed on River Arno in Florence in 1619 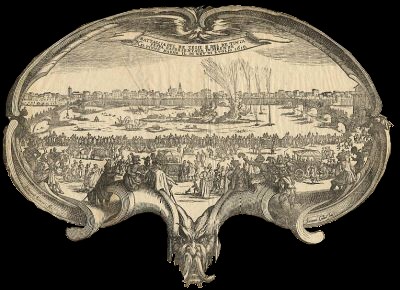 Jacques Callot's etching, said "L'Eventail", although made for handscreens, but which gave its shape to several Louis XIV fans

Folded fans sticks were generally of ivory, often little decorated, but where one associated soon incrustations of mother-of-pearl or turtle shell. At the end of the century, the progress of the techniques let appear turtle shell sticks, some possibly "piqués" of gold or silver, with decorations ŕ la Berain) or out of mother-of-pearl, when it was possible to carry out firmly sticks comprising four or five pieces stuck together. The most luxurious fans received noble metal sticks, which generally did not resist the cast iron, in particular by application of the royal edicts. This explains, with the accidents which have occurred on the other types of sticks, that many leaves of this time reached us in the form of paintings, often thus "put at the rectangle " and more or less repainted. (See, for instance, our "piggy" fan) Forms and styles may vary. However there is a prevalence of dark backgrounds, and, often, on the back of the fan, of remarkable flowers bunches, extremely comparable with certain paintings then in vogue. Sometimes (in England in particular, where coarser skins were used, and where the fan comprised only one simple leaf (mounting precisely called "ŕ l'anglaise "), the reverse comprises a simple overscoring of the "ribs" (bouts) by a sinuous gilded line.

At the end of the century, in imitation of fans introduced from Asia, a production of "brisé" fans was developed. They were generally with ivory sticks, seldom woodden ones. They will be often openwork, and the reverse reproduces in drawing or blurred hues the painting seen by transparency. Meticulousness of the painters, and the particular suitability of the ivory for the miniature gave place here also to very beautiful objects.

home next (in french but with pictures, links etc) history page