From Vietnam, or from Brittany ?

Surprising question : it was however asked to us when, in the eighties, we discovered this fan in a public auction sale, presented in a box of " Ate Buissot et fils ".

The appraiser presented it like a " second half of XIXème century " fan, with a maritime or lake scene, perhaps representing a landscape of the Far East with "jonques" boats. He added: " and it is signed! ". 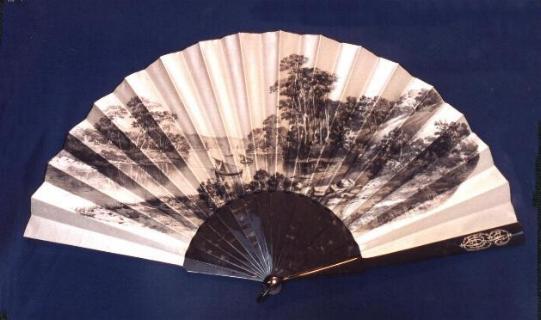 Indeed, the boat, if it is quickly looked at, resembles a little those light boats. However, when we saw this fan, the scene appeared surprisingly familiar to us, French people from Brittany). In fact, it was one of the fishing vessels which furrowed still a few decades ago the Road of Brest.

These boats are called " kerhorres boats ", after the name of their principal home port, on the river Elorn, which floods between Guipavas and Kerhuon in north, and Plougastel in the south. 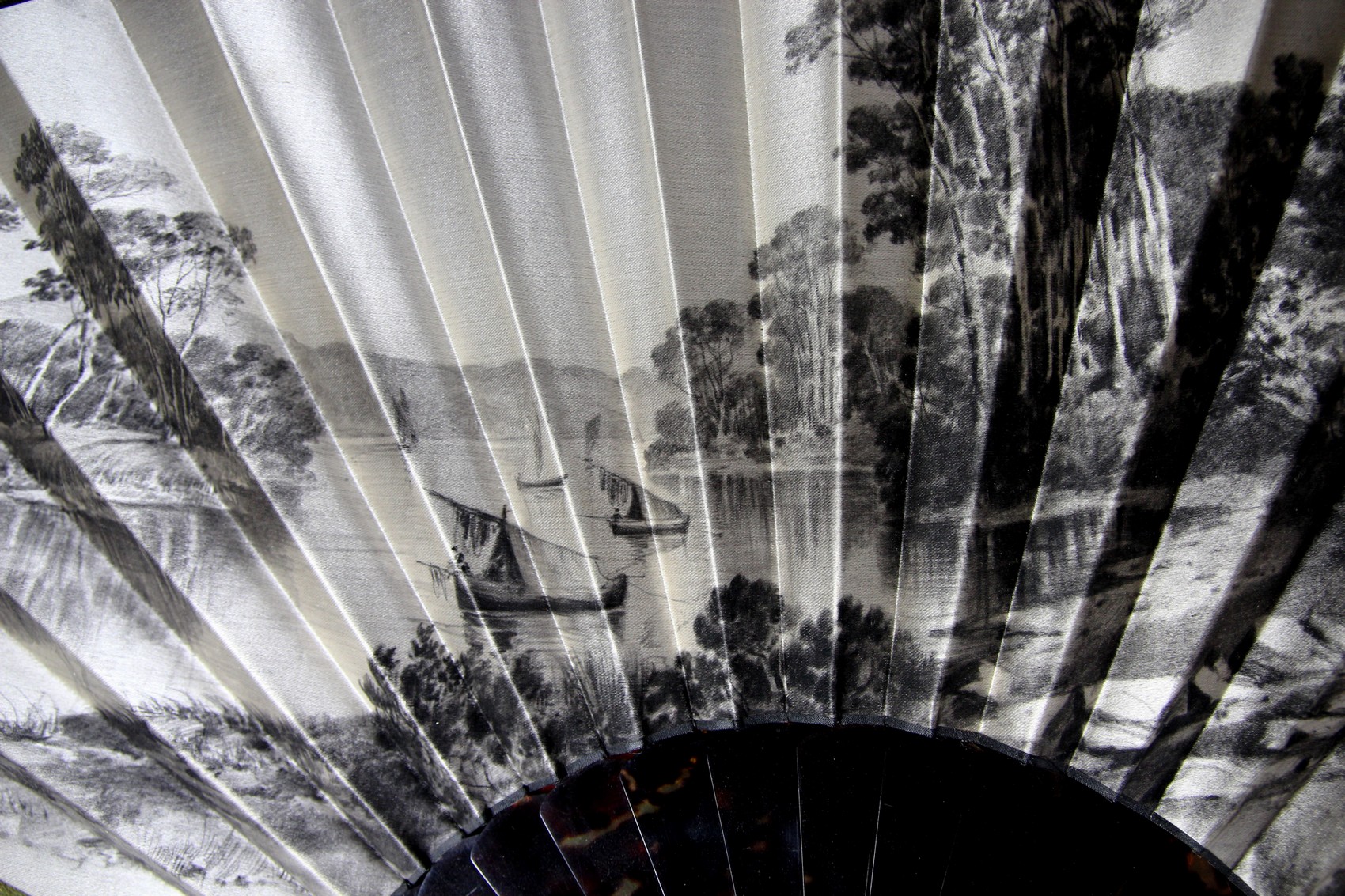 The year 1888 had nothing astonishing taking into account the fan look and size, as well as the address of the eventaillist (46, rue des Petites Ecuries in Paris), even if it is known that Emile Buissot took in 1887 the succession of his father. We showed this fan to the Curator of the Museum of Brest, Mr. Le Bihan. He quickly gave us very precise indications : the signature, indeed, was that of a painter he knew, the Museum having some works.

This painter was Gilbert Miriel, who was a drawing teacher at Brest Naval College (let's say the French "West Point").

Here is what he knew about this man :

"... for long years professor of drawing at the Naval College of Brest, painter of talent, he was devoted partly to the "charcoal" which he treated " in the black manner ", blackening its sheet and sparing lights by erasing the matter with a bread crumb. He invented a very effective process to fix the charcoal... "

" He exposed his works at the Paris "Salon" from 1875 to 1890. In spite of a very bad health, he nevertheless went on painting... with a consumed art. It is also the time when he painted fans, because it seems that he made a certain number of it, sold in Paris and in the area... "

Gilbert Miriel was "brestois", he always has descendants in the city, and one of them manages a trade dedicated to the fine arts vis-a-vis with the museum ! "

Thanks to this invaluable introduction, we became acquainted with Mr. Henri Miriel, who with a great kindness, provided us a number of informations about his great-grand-father, alas limited, family papers having being burned during the 1944 bombardments.

" my mother remembers to have seen other fans, which belonged to my grandfather, fine pieces, with beautifull mounts ".

" I have rather many G Miriel charcoals, small washing, marines and various oils. Several relate to the Elorn creek, in Plougastel.. "

G. Miriel, as a charcoal on canvass spécialist , seems to have cherished landscapes with watersights.  So we can read : "M. G. Miriel, a former drawing teacher of the Naval School, was pleased to reproduce the Kermerrien spots and one of his large charcoals on canvass, showing the waterfall of Kermerrien pond adorns a wall of the "grand salon Tourville, à la Préfecture Maritime, à Brest "(Guillaume Toscer 1856-1910, Le Finistère pittoresque, Brest, 1908) Let us add that this  Kermerrien pond, a part of Guilers "commune" is distant from river Elorn only by some kilometers.

We thus answered some of these "fan questions". Some others remains, and in particular about the former owner : one can be, taking into account the tone of work, the reverse and the black box, assured which it was a mourning fan. The guard gives us the owner's initials : E.H. (as it is not easily readable, we are happy to find confirmation of it on the box, in silvered letters on black bottom).

The fan not having left the area, one can suppose that this lady belonged to a local family and a quite wealthy one, but without title of nobility which a crown would have recalled on the plume, and (we may assume) having one of the beautiful properties which look on the river that this fan illustrates so well . Who was she ? We have some tracks, but we would have to consult "état-civil' registers, the mourning fan being alas consequence of a death...

At the end of 2010, a long time after having posted this page, a very long time after having bought our fan, we at last have been told by a "fan friend" that she had found another by Gilbert Miriel. A nice one, showing the Meditteranean coastal landscape of Salerno, near Napoli.  As we say in French : "tout vient à point qui sait attendre" ! We thank her for authorizing us to reproduce it here.

In November 2012, we found (by chance) that another fan  probably very similar was showed in 1887 in an exhibition in Rennes. We note in the catalog, p. 95, No. 857, "Miriel (Gilbert), Vico (Gulf of Naples), fan, black pencil drawing on satin."  Vico Equense in only some 50 kilometers far from Salerno. This fan obtained, according to a handwritten note, a "second medal!" Miriel Gilbert appears as "born in Brest, and residing in the Rue de Paris, Villa des Arts, Brest." He also exhibited a "view of Sorrento, black pencil drawing on black satin", a "screen, black pencil drawing on black satin", representing "the torrent de la Pique Luchon,"  and also an " undergrowth creek"and three charcoal on canvas depicting landscapes of Brittany. For all these works it seems he would have obtained a third medal. 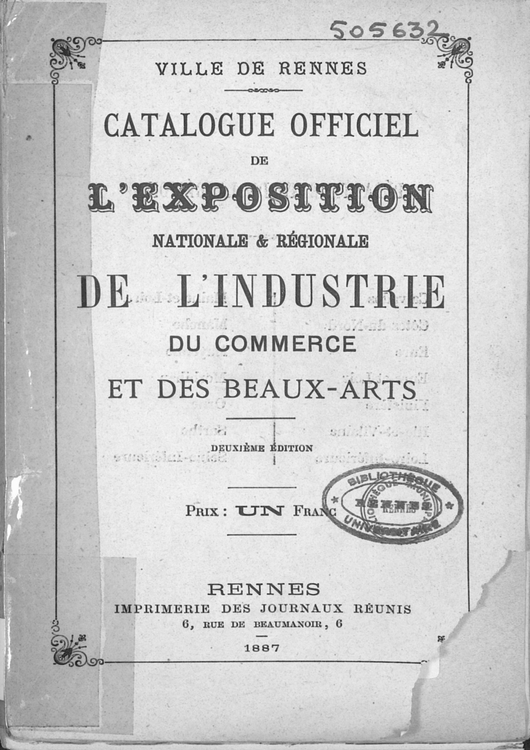 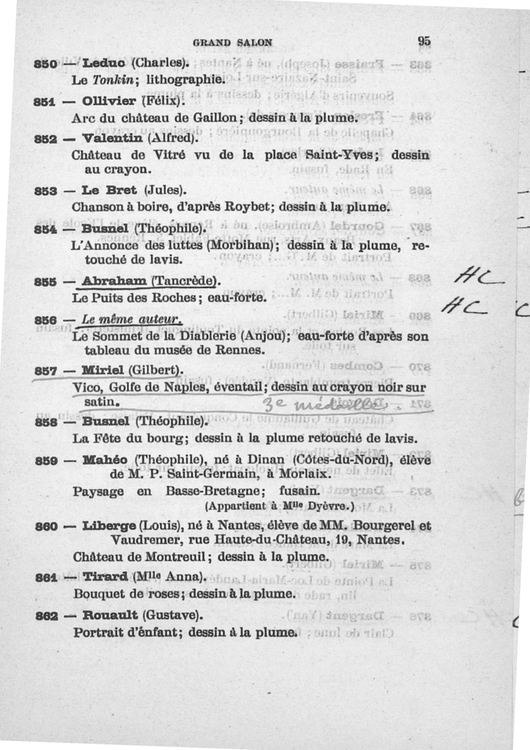 We have more recently, on browsing in a local newspaper of the time, learnt that G. Miriel had exhibited in the Salon de 1878  two charcoal drawings: a Coup de vent  and a Paysage en Bretagne, le Soir.
At the Salon de 1881, he was again present with two charcoal drawings on canvas. They were praised by the critic. (See our matching page in French). We do not know if the 1878 works were already on canvas. 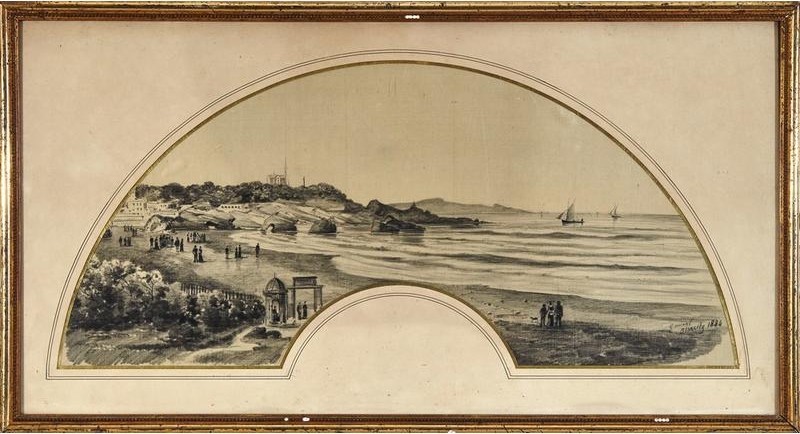 And if you own or know others Gilbert Miriel's fans, please tell us !