Le temps s'en va, le temps s'en va, Madame... In 2008 -almost yesterday- we had posted, on the occasion of the Beijing Olympics, the country of origin of the folded fan, a "special page".

It is likely, provided that heat is at this rendez-vous,  that the Games will be the opportunity for many viewers to receive and use fans. It will not be the first time. We'll spare you the sight of such fans of Alberta (1996), which mix  the glories of Sports, of the United States of America and of a manufacturer of carbonated beverages ... We will go back much further here, with some fans dealing with the Olympic Games themselves or with sports.

NB: the fans shown below, as throughout the website, may not be reproduced without our express permission. Any theft would be subject to an appropriate retaliation! Thank you for your understanding.

First let us evoke the 1908 Olympic Games in 1908, already in London,  with a French sportsmab who did not participate!

Indeed, the then famous Jean Bouin was marked by an adverse fate in his Olympic attempts. 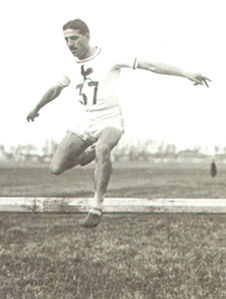 Selected at 20 for the London Games in 1908, Jean Bouin was not allowed to compete by the French delegation, because it had escaped from the Olympic village on the eve of the olympic 5000 m  and had been involved in a brawl in a Soho bar before spending the night at the police station.

So his chances seemed great for the 1912 Stockholm Olympic Games. During the "series" he beated a world record . But in the finals, he led virtually the entire race, but was behind in extremis 2/10 seconds behind the Finn Hannes Kolehmainen.

The fan below was published in 1913 by a club to which he belonged: the Athletic Club of Societe Generale, a big French bank. 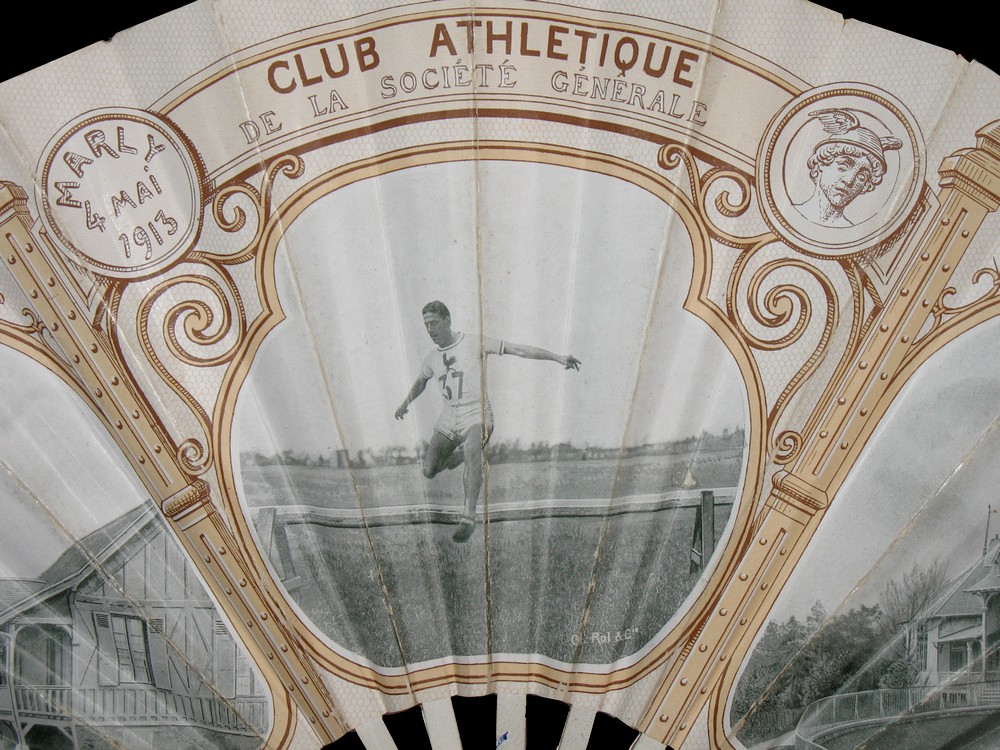 A few weeks later, again in Stockholm, Jean Bouin beat the One Hour world record (19.219 km). He had stopped smoking and was preparing his revenge for the 1916 games: unfortunately WWI arrived. Jean Bouin died during a battle on September 29, 1914. The second fan we present here is more directly related to the Olympics. As the Société Générale fan above, it is well known. 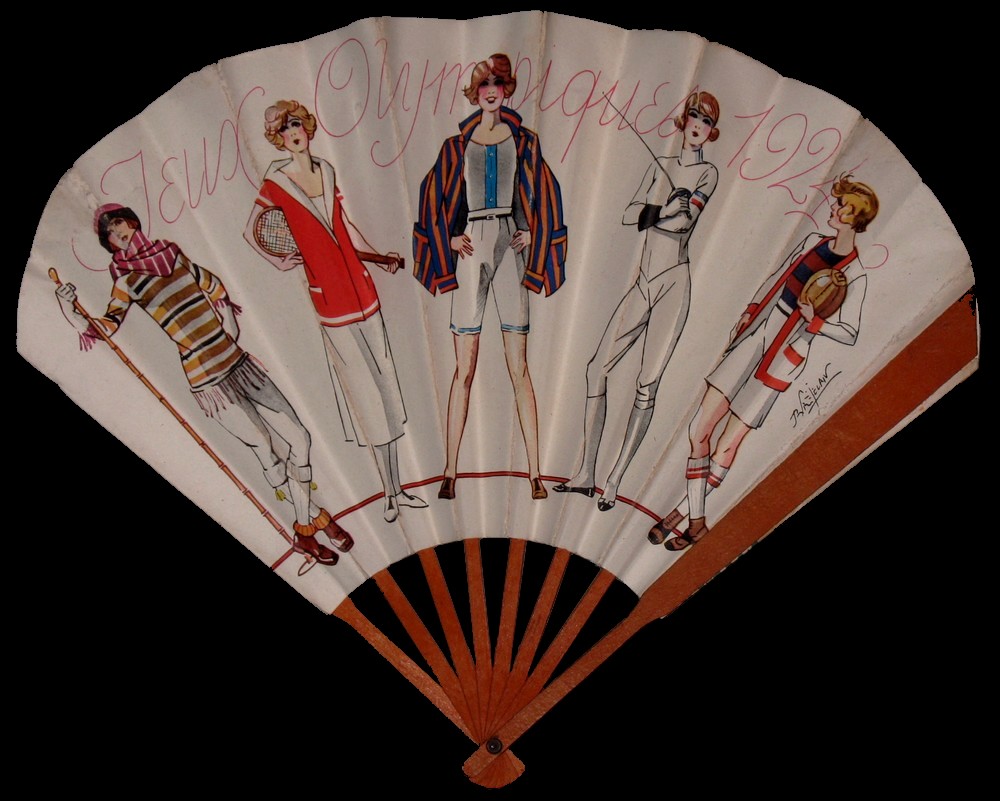 Very nice, showing the remarkably feminine elegance of the 1920s, it is also in our view a feminist manifesto!

For the arrival of women in the Olympics was difficult. The Baron Pierre de Coubertin saw it with a dark eye. Did he not said in 1912 "Female Olympics would be impractical, uninteresting, unaesthetic, and incorrect. The true Olympic hero in my eyes is the male adult individual. The Olympics should be reserved for men. Women's role should be primarily to crown the winners. "

This womanly conquest was therefore very progressive: no women in 1896 at the first modern games in Athens, golfers and tennis players in the 1900 and 1904 Games (6!). In 1908 they were 36 female the 2606 participants included 63 women. During the tennis competitions the famous Suzanne Lenglen swept two gold medals and one bronze.

Olympic Games in Paris in 1924 progress was clear:  290 women athletes on 3092, including fencers. for the first time.  But  Serge Laget  said in Le grand Livre du Sport Féminin, FMT 1982  (The Great Book of  Female Sports ) about this fan, "The artist, incidentally a shooting champion, took his wishful thinking for truth... Climbers are not tolerated . Tennis players are there one last time ... and fencers will suffer for their their baptism of fire. As for rugby players, they have always been absent from the Games. "

The artist, Rene Prejelan, was indeed a distinguished shooter and also wrote the "Souvenirs d'un fusil de chasse" (Memories of a shotgun). He was mainly, according to E. Benezit (Dictionnaire des Peintres, Sculpteurs, Dessinateurs et Graveurs. Grund, Paris, 1999.)  (Dictionary of Painters, Sculptors, Designers and Engravers. Grund, Paris, 1999.) the "creator of a comic book Jo and Josette in the journal "Qui lit rit" during the 1900s. He collaborated to several illustrated papers of time: La Caricature, La Baďonnette, Le Rire.... He helped to create, in the satirical periodicals of the time, the type of "la petite femme 1910". He also made sketches of animals and sports.

With this fan he intended perhaps to help to open he Olympic women's to other sports. Anywaysd he showed that women can be both sporty and charming! 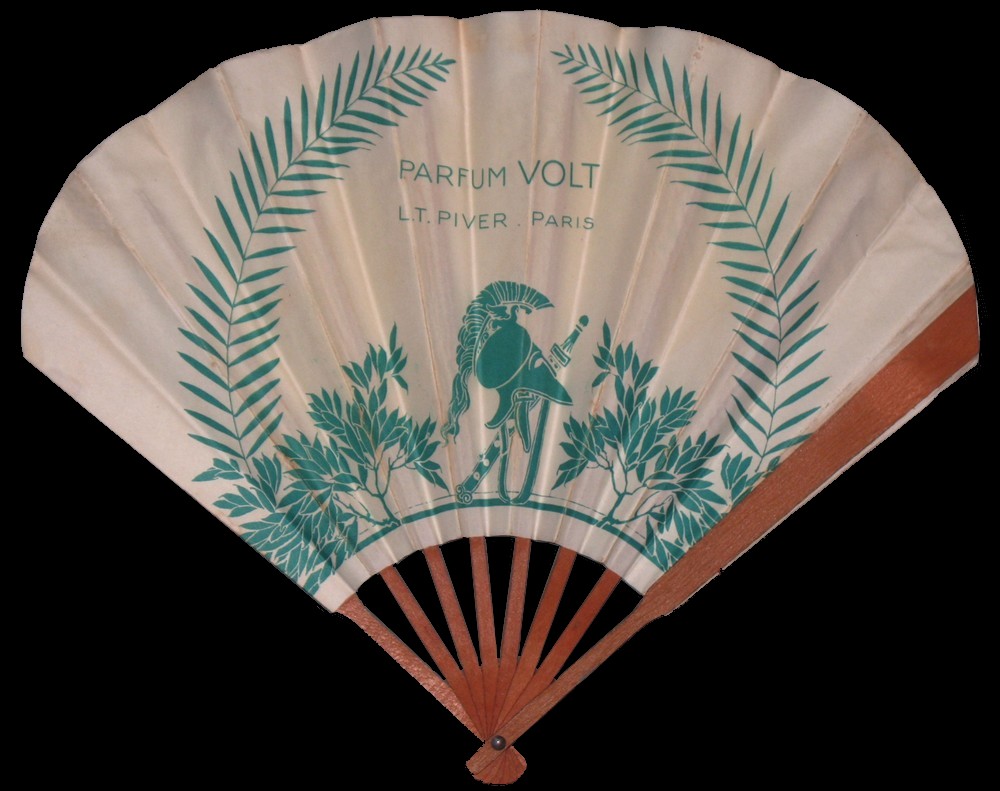 The other side, devoted to advertising the famous perfumer Piver, continues to illustrate the themes of the Olympics: Greek helmets and swords, olives, bay... that we find on other documents of the 1924 Olympic Games as on other occasions.

A faint smell of perfume stands still ... Is it the perfume "Volt"? presumably, because we know that the Piver fans (as those from other perfumers) were often scented with the fragrance they were promoting.

But Olympics in the news  is also an opportunity -or a pretext- for showing some  "sporting fans".

Antique fans lack sports in the modern sense : but they show a lot of physical activities, hunting and games.

To celebrate the passage of the Olympic relay from China to Europe, let us look at this fan from the time of Emperor Kangxi and of King Louis XIV, showing a hunting scene. It is known that those fans, made for the Europena Market, where at the beginning of a brisés fans fashion.

Here, on a fan of the same period, but European, Diane is chasing the unfortunate Actaeon. It finds its modern counterpart in the twentieth century with an advertising fan trom the U.S. 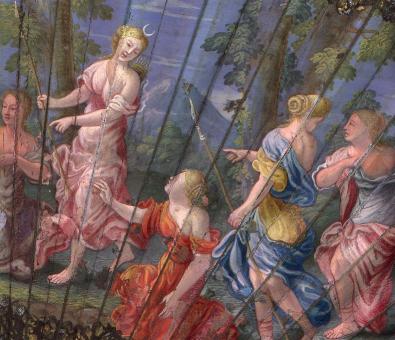 See here, in the second half of the eighteenth century, participants to the papegault game, then so important for the defence of our cities : in some respects it is an ancestor of military service, but also of the Olympic Games, when we remember the strong link that there was often at the end of the nineteenth century between sports and training for war!

Amidst these sports that are so close to war, we must naturally consider fencing. It was evoked in 1908, the year of the first London Olympics, by the Bon Marché stores in Paris with a fan of both advertising and events. At Men's Epee, France became famous (British friends, forgive me this so French bragging !). Indeed, Gaston Albert won the gold medal, Alexandre Lippmann silver, and Eugene Olivier bronze . And  our  French team  was again Number One before the UK!

The Baron de Coubertin would have been surprised, we guess, to know that the French delegation for the London 2012 OG would be leaded by the talentuous fencer Laura Flessel . Perhaps he would have more easily admitted that beside the martial Tug of War (official team event during the ancient times Olympiads and from 1900 to 1920) badminton was on the programme (it is since 1992). This  sport, for a long time womanly or childish is shown on this fan design taken from Kate Greenaway. Maybe he would even have welcomed the jeu de "Grâces" (Game of Graces in English). See it below on a fan shared by a collector friend. The Game of Graces was considered a proper game benefiting young ladies and, supposedly, tailored to make them more graceful. (according to Homestead American historical museum Folk Toys Nashville, Brown County Indiana, quoted by  Wikipedia) The advantage would have been to feature the Olympic Rings !

(Collection AMK)
However the fan that best symbolizes the Olympic Games usability is maybe an advertisement for an alcohol which was supposed to give strength to athletes!

Here is a commercial fan for the apéritif "Robur au quinquina (cinchona)", where we see athletes of all kinds coming together under the banner of the "Rendez-vous des Sports" café. Here dashing horsemen, bold navigators, modern cyclists and may be traditional walkers gather  and find after exercise the comfort of a shared drink.

This drink is gone, along with the house P. Leménil Asničres (Seine), "Advertising Fans specialty"  and elegant sports are from another era. The back of our fan  said "In your family, give the Robur to your children and friends", and now then we must by Law give advicey that alcoholic beverages must be consumed with moderation.

And yet, we hope that during these 2012 Olympic Games no athlete will use  more dangerous products than this "Robur au Quinquina"!